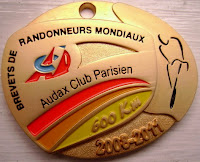 I`m going to rest on my laurels a bit and rehash the 2011 randonneuring season. This was the first year that I succeeded in completing a full Super Randonneur series. If you're not familiar with the sport of randonneuring (in a nutshell it's long distance bicycling), you can find out all you need to know from the Audax Club Parisien and les Randonneurs Mondiaux. I also have a link to the Nova Scotia Randonneurs club under my favourites (to the right here). So here are my medals.

First is the Super Randonneur medal itself: along the bottom edge you can see the little yellow (200 km), green (300 km), purple (400 km) and orange (600 km) ovals denoting the four brevets that must be completed in a single season in order to qualify.
Next is the medal for the 600 kilometer brevet. I rode this in Nova Scotia with the club from Halifax. It was a loop encompassing Sheet Harbour, Pictou, Oxford, Parsboro, Truro and Dartmouth. 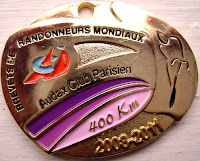 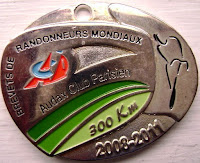 The 400 kilometer brevet was also in Nova Scotia. We went north from Halifax to Brookfield, then Chezzetcook, Brooklyn, Windsor, Kentville, Chester and back to Dartmouth.

I rode the 200 and 300 kilometer brevets on the Avalon and, to my knowledge, it's the first time brevets of any distance have been recorded and "homologated" from Newfoundland. You can see detailed maps of these routes under "My Favourite Bike Routes" just to the right here. The 300 wasn't entirely a solo effort: my uncle accompanied me on the first 100 kilometers, and my brother and sister in law joined in for the final 75. 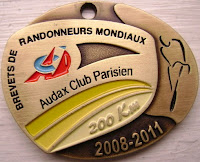 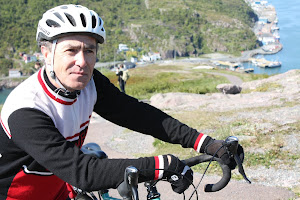